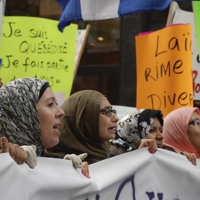 Women around the world are striving for full gender equality in how they speak, work, and pray. But feminism takes on new meaning when viewed through the lens of Islam.

“I think that Islamic feminism is actually going to be the entry point for this whole renewal of Islamic discourse… So it will be up to the Muslim women themselves who are not willing to let go of their religion, but at the same time, they are not willing to accept being treated as second class citizens because of a certain version of religion.” -Marwa Sharafeldin, Muslim family law reformer, Cairo, Egypt

In this hour-long program we travel the world to examine the meaning of Islamic feminism and meet with women activists who are working for change. We visit Egypt, where we learn how one of the world’s most influential centers of Islamic study is squaring its teachings with the changing status of women. In Morocco, we go to a courthouse where recent changes to Muslim family law are making it easier for women to divorce, inherit property, and gain custody of their children. In France, we look at how extreme secularism may be protecting or persecuting Muslim populations. And in the United States, we visit the country’s first all-female mosque, and learn how one progressive Muslim feminist is expressing herself and her religion in a surprising way — with comedy.​