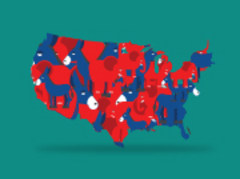 It is alleged that the practice of gerrymandering—dividing election districts into units to favor a particular group—subverts democracy by making congressional districts “safe” for one party or the other. As a result, only those voting in primaries are in effect choosing our representatives. Are primary voters more extreme in their views, and therefore pulling democrats to the left and republicans to the right? Or is the impact of gerrymandering actually overblown, while other more divisive contributing factors like the emergence of ideologically charged TV and radio outlets, the role of the Internet and social network “echo chambers,” and campaign finance practices are in fact the real drivers of increasing partisanship? If gerrymandering is a major problem, is there policy or constitutional principles that might be part of the solution?