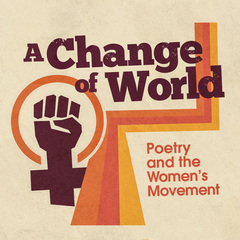 “A Change of World” tells the story of how poets who were swept up in the Women’s Movement of the 1960s and 70s radically changed American poetry. As poet Alicia Ostriker says, “For the first time in the history of writing, which is about 4000 years or so, women could write without fear, without constantly looking over their shoulder to see if they were going to be approved of by men.” How did this come about?

Betty Friedan’s “The Feminine Mystique” was a primary catalyst of The Women’s Movement. In poetry, it was Sylvia Plath’s posthumous book “Ariel,” which electrified a generation of women poets. We’ll hear from Plath herself and from women poets who were coming up during the 1960s. We’ll also hear about the radical sexual and psychological candor of Plath’s friend, Anne Sexton.

By the 1970s women poets were publishing a huge variety of poetry that simply was not imaginable a decade earlier. Yet they still didn’t have mainstream literary approval. When Adrienne Rich won the National Book Award for Poetry in 1974, she accepted on behalf of her fellow nominees Audre Lorde and Alice Walker. This was a watershed moment. As Honor Moore says, :It was shocking. Feminism had no standing in the culture.  It was courageous in the sense that none of these three poets would ever be accepted or considered in the same way again.”

In the face of continuing sexism in the literary establishment, women poets began forming their own informal communities, with readings, magazines, bookstores, workshops and mentorships. We’ll hear about this movement from poets who participated, like Sharon Olds, Judy Grahn, Sonia Sanchez, Susan Griffin, as well as archival audio from some of the leading poets of the time.