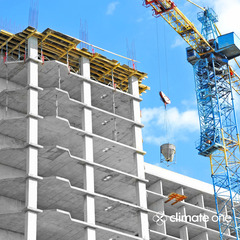 Along with aviation, the construction industry is one of the hardest to decarbonize sectors in the global economy. Cement and steel production together are responsible for about 15% of global CO2 emissions. But look around our modern world and it’s hard to imagine doing without these materials. Radhika Lalit, Chief Strategy Officer at the energy think tank RMI, says the use of cement is not even unique to the modern world:

“You’re looking at cement that was developed 12,000 years ago in some shape or form. We had cement that had built the Greece and the Roman Empire, subsequently in England someone came up with Portland cement which is the most important cement that you use right now. But it is all pervasive and…one of the most consumed materials in the world after water.”

It takes a huge amount of heat to make cement, and that is the primary reason its production causesr 7% to 8% of global greenhouse gas emissions. If cement production were a country, it would rank third in such emissions, behind China and the United States.

Steel is surprisingly recyclable; in fact about 70% of the steel used in the US is recycled. But we can’t use recycled steel for every application. To make primary steel, one needs high heat to reduce the iron ore into iron. That process is the reason why steel is also responsible for 7% to 8% of global greenhouse gas emissions. Chathu Gamage, Manager of Climate Aligned Industries at the energy think tank RMI, explains that when cooked coal – or coke – is used to reduce iron ore into iron, that chemical process itself emits even more CO2:

“That’s really due to the coke used or coke is also referred to as, you know, cooked coal. And that’s used mainly for high heat purposes within the blast furnace as well as a reduction agent. So, the main ingredient in steel is iron and to get that iron we need to first reduce the actual molecule which is iron ore extract that oxygen off. So, you’re left with iron but you also then you know because the carbon binds to the oxygen you get CO2. And so, that process will need high energy sources and a reduction enabler.”

But Gamage highlights one lower-emission technology – Direct Reduced Iron, or DRI – that already produces about 10% of global steel, using natural gas instead of coal. ”Just using natural gas instead of coal, emits about 50% less per ton of steel.” Another lower-emitting technique relies on so-called green hydrogen, which is produced by using renewable electricity to split water (H20) into hydrogen and oxygen.. When the hydrogen is burned to produce the necessary heat, it recombines with oxygen from the air, and the only emission is water vapor. “So, we would use that the same way that you would with natural gas in a DRI to produce green steel.”

John Fernández, Professor of Architecture at MIT, says that many builders are also looking to replace carbon-intensive materials like cement and steel with engineered wood products, often referred to as mass timber. “About half of the dry weight of wood is carbon. So you’ve got two major elements in reducing carbon emissions when you’re using wood of any kind and mass timber. Certainly one is that you’re sequestering that carbon in half the dry weight. The second is that you’re replacing steel or, or concrete. So the amount of carbon that you’re sequestering is just half of the equation. The other half of the equation is that you’re displacing the cement or the steel that you would be using otherwise.”