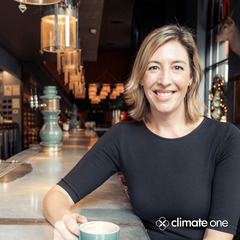 After a 20-year career as a tech reporter for CNET and the public radio program Marketplace, Molly Wood has come to see the climate crisis as an engineering problem requiring a lot more investment. In one of her last journalism projects, she produced the acclaimed documentary podcast  “How We Survive”  for Marketplace.

Among the many stories in the podcast, she visits a brutally hot squatter’s community on federal land in Southern California known as “The Slabs,” where people are barely surviving. She also tells the story of human generosity during the aftermath of Hurricane Ida in New Orleans, where one man with solar panels and batteries lent his electricity to those in need during the days-long power outage. In the final episode of How We Survive’s first season, Wood says that there’s one possible future where we adapt to climate change and avoid the worst impacts. And there’s another possible future where we don’t.

She says framing the climate crisis as an engineering problem gave her a path to explore resilience, adaptation and solutions.

“That’s why I called that series ‘How We Survive’ because the eight-episode podcast was the culmination of about four years of ongoing reporting under that name. And it really was a very literal approach to, okay, well, how are we not gonna die when things start to get more and more terrible.”

Now, she’s moved out of journalism and into venture capital, where she sees greater potential for climate solutions through focused investments. “Money can actually enable a solution to be born,” she says.

“We always talk about how capitalism is the disaster, it is the market failure, it’s the thing that’s created this problem. Greed is the reason that we’ll never get out of it,” she says. “But also, [the climate crisis] seems like kind of a big business opportunity.”

“There’s something very clean about venture capital. And it’s like if it works, it makes a lot of money and if it makes a lot of money, it works. And when you look at that scale of the change that needs to happen, it needs scale. It needs to be consumer solutions that everybody adopts, not because they feel good about it but because it’s the best possible thing to buy and do.”

She calls the Inflation Reduction Act “an absolute game changer,” because it will fund basic scientific research, which, once proven, can then allow venture capitalists like her to create a path to commercialization for new technologies.

“At some point, extinction is a really powerful motivator,” Wood says. “We might lose a lot of humans before we get to the point where we have to fix it. I do not want to sugarcoat that.”

And yet she is genuinely hopeful about human ingenuity finding ways to survive, and perhaps even be better off in the future.