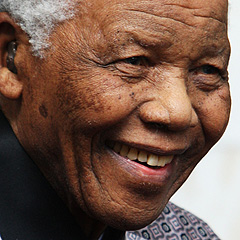 In this special program, you’ll hear Nelson Mandela as you’ve never heard him before. This program draws on 50 hours of recorded conversations with Mandela, held for many years in Johannesburg by archivists at the Nelson Mandela Centre of Memory.

IDEAS on CBC Radio was the first radio program anywhere in the world to be given full access to these remarkable recordings.  The man chosen to record Mandela’s life story was Rick Stengel, a young reporter working in South Africa for Rolling Stone magazine. From 1992 to 1996, Stengel shadowed Mandela, using his small cassette machine to record the stories which would help in the writing of Mandela’s autobiography, ‘Long Walk to Freedom’.

The two other key voices in the documentary are the current managing editor of Time Magazine Rick Stengel and freelance radio producer Robin Benger.

This was first broadcast on CBC Radio in May 2013. It was updated for the death of Nelson Mandela.  For more information you can visit their website, here.