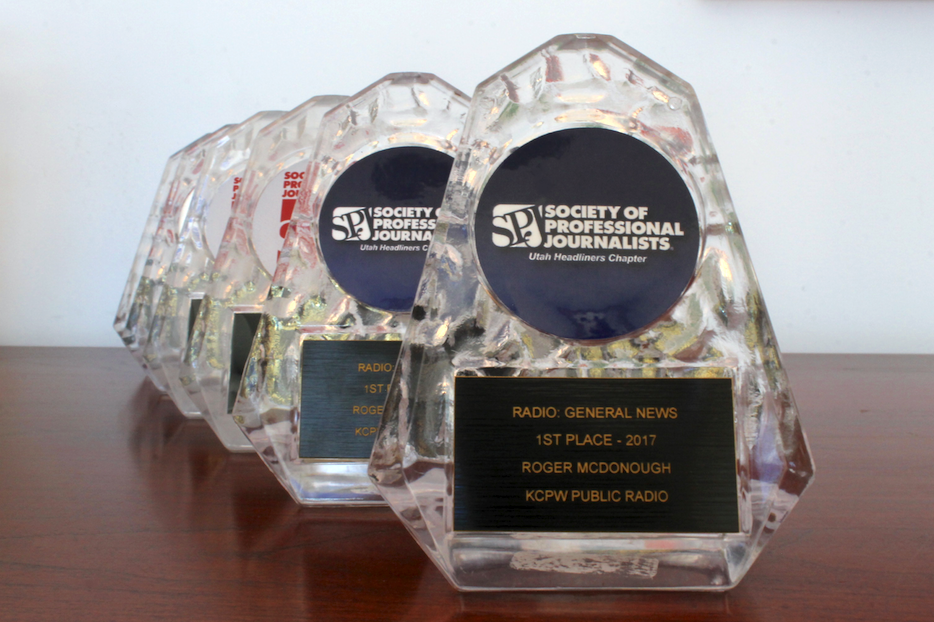 KCPW took home honors at the Utah Headliners journalism awards banquet on June 15. The awards are given out by the regional chapter of the Society of Professional Journalists, and KCPW is proud to have been recognized by our peers in several categories.

Roger McDonough garnered first place honors in the Best General Reporting and Best Spot News categories for two election-year reports: in March of last year, Roger covered the unprecedented turnout for the Democratic and Republican caucuses and the protests that occurred during the visit to the state by then-candidate Donald Trump.

Ross Chambless, along with the hosts of the KCPW politics show Both Sides of the Aisle, received third place in the Best Public Affairs / Talk Show category. The program is a weekly debate over politics in Utah with hosts Natalie Gochnour, Sen. Jim Dabakis and Rep. Dan McCay. You can hear the program Thursday mornings at 10:30 a.m. and Sunday mornings at 11:30 a.m. on KCPW 88.3 FM.

Emily Means, Roger McDonough and the joint KCPW-Salt Lake Tribune team responsible for Behind the Headlines received an Honorable Mention in the Best Public Affairs / Talk Show category for the weekly news roundup that brings newspaper reporters into the studio to discuss the stories they covered. Tune in Fridays at 9am for the live broadcast and Sundays at 10am for the re-airing.

The Society of Professional Journalists, founded in 1909, is the oldest organization representing journalists in the United States. It has nearly 300 chapters around the country and its Code of Ethics lays out guiding principles relating to ethics, accuracy, and fairness for newsrooms everywhere. “Public enlightenment is the forerunner of justice and the foundation of democracy,” reads a section of the preamble to that code. Click here for more information on the Utah Headliners Chapter of the SPJ.

This nonprofit news and information resource exists because of the support of the local community. We hope you’ll take pride as well in our accomplishments and continue to support our work.

Announcements A Change for Behind the Headlines
Live
Music Song
0:00
/
Loading