Hosted by celebrated journalist Michael Barbaro, the popular podcast produced by The New York Times expanded to include a radio edition, thanks to a collaboration with American Public Media. 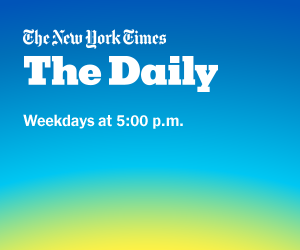 The Daily draws on the unrivaled quality and expertise of The New York Times’s global footprint of more than 1,450 journalists; and the radio edition will give KCPW listeners a deep analysis of one or two of the day’s top news stories.

“We’re proud to add this program to the current line-up. Listeners appreciate in-depth looks at the news and that’s what The Daily delivers, ” said Jesse Ellis, KCPW’s Operations and Program Director.

The Daily airs weekdays at 5:00 p.m., preceded by BBC and followed by Marketplace. Click here for KCPW’s full schedule.

About the Host
Before hosting The Daily, Michael Barbaro was a national political correspondent for The New York Times and host of The Run-up, a political podcast that chronicled the 2016 election. Previously, he covered New York’s City Hall and the U.S. retail industry. He joined The New York Times in 2005 from The Washington Post, where he began in 2002 as a reporter covering the biotechnology industry.

About American Public Media
American Public Media® is the national programming division of Minnesota Public Radio® and reaches 20 million listeners via 1,000 radio stations nationwide each week. APM is one of the largest producers and distributors of public radio programming in the world, with a portfolio that includes BBC World Service, Marketplace®, and the leading classical music programs in the nation. APM offers a diverse array of podcasts featuring the best in food, culture, entertainment, business and investigative journalism.