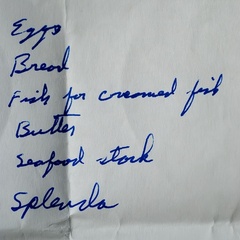 This hour: To do lists, compulsive lists, data lists, lists in literature and a list of firsts.

The List
by Sean Cole, Ashley Ahearn and Nick van der Kolk (Love & Radio, 2011)
A man sets out to finish an unfinished list.

They Didn’t Get Along
by Rick Moody and Michael Hearst (Third Coast ShortDocs Challenge/Re:sound, 2006)
A list of things that clash.

First Love and 27 Other Firsts
by Whitney Jones (Cowbird.com, 2012)
A love story, in the form of a list.