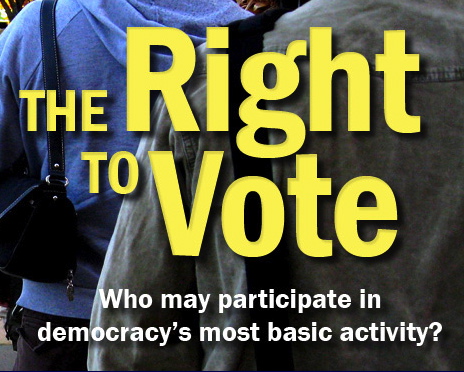 We look at the much-contested right to vote in America: from slaves freed after the Civil War, to women’s suffrage, to the civil rights movement, to today’s debate over whether voters should be required to show ID at the polls. In The Right to Vote, we hear diverse voices and views, plus archival audio, on the long battle over who is included in our democracy.
When the United States was founded, only white male property-owners could vote in most states. Gradually, the franchise has expanded — but the debate continues to this day. In this fast-moving documentary by David Freudberg, we trace the fascinating twists and turns of a core American activity, with the nation’s leading historian on this topic, Harvard’s Alexander Keyssar. We hear the personal story of Univ. of Florida religion professor Gwendolyn Zoharah Simmons, who at age 19, against the wishes of her parents, participated in the 1964 Mississippi Freedom Summer Project for voter registration, when three young civil rights workers were murdered. Also, historian Faye Dudden recounts highlights of the women’s suffrage movement.

In addition, long-time Washington Post executive editor Leonard Downie Jr. reviews the scant evidence of voter impersonation (a flashpoint in the controversy over whether voter IDs should be required). Also weighing in on voter IDs are former Secretary of State Colin Powell; Trey Grayson, former Republican Secretary of State of Kentucky; and Myrna Perez of NYU’s Brennan Center for Justice. And we listen to the stories of two convicted felons in Florida who are seeking their right to vote.

The Hinckley Institute Radio Hour Debate on Count My Vote