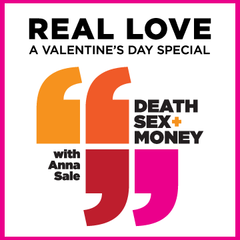 Real Love with host Anna Sale is a one-hour Valentine’s Day Special from WNYC’s Death, Sex & Money. It’s a personal, honest look at love and how it defines the many chapters of life. Celebrities as well as listeners from all over the U.S. share their most intimate thoughts about falling in love, navigating the highs and lows of marriage, testing boundaries, forgiveness, and breaking up.

The show features well-known voices talking about personal moments. Jane Fonda reflects on her marriage to Ted Turner — both its beginning and its end — and about getting into a relationship again.  Sex columnist Dan Savagedivulges the surprisingly significant issue in his marriage: his husband’s online spending habits. Nashville coupleJason Isbell, formerly of the Drive-By Truckers, and Amanda Shires talk about how they deal with jealousy and temptation on the road. James McBride, author of The Color of Water, shares his life priorities after a failed marriage — and whether he thinks he can ever commit again. Chaz Ebert reflects on the last months of her husband Roger Ebert’s life, when she became not only his caregiver, but also his voice.

You’ll also hear from Death, Sex & Money’s listeners about money, relationships, infidelity and pre-nups. Host Anna Sale also shares her own story about how a retired U.S. senator got mixed up in her love life and convinced her to get back together with her boyfriend after they broke up. Part of this segment aired on This American Life, which launched Death, Sex & Money to the number one spot on iTunes podcast charts.

This special will air on Friday February 13th at 10 AM and 8 PM.