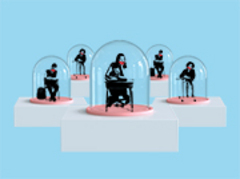 Long hailed as bastions of intellectual development and ground zero for the free and spirited exchange of ideas, today’s universities have come under attack by those who argue that a new generation of students and administrators are trading in academia’s most cherished values for political correctness and inclusion. At the heart of this debate is the question of safe spaces, how we define them, and whether they aid or hinder intellectual inquiry. Deeply rooted in social justice movements of the past, these spaces promise a reprieve from bigotry and oppression by allowing today’s students – the most culturally and racially diverse in history – the opportunity to express themselves in an empathetic environment. But to their critics, safe spaces pose a dire threat to free speech and undermine the resilience of a generation. Are safe spaces dangerously coddling young minds? Or are they a legitimate and necessary component of modern education?

“Enforcing safe spaces can exacerbate dangerous divisions in our society. Our society is deeply polarized. By sealing off large parts of the campus to guard against certain ideas and viewpoints we’re going to make that problem worse.”

“Safe spaces that protect students from offensive or disagreeable speech are anathema to the First Amendment and the freedom of expression that we all hold sacrosanct. Safe spaces infringe upon core fundamental First Amendment principles.”

“Speech does not come out of a vacuum, and human beings are not autonomous entities. We are social animals. And we develop our ideas together in these safe spaces, called associations. And that is why, sometimes, associational privacy trumps freedom of speech.”

The Rundown The Rundown: Robert Grow & Christie Oostema Try to “Envision Utah” As Its Population Expands