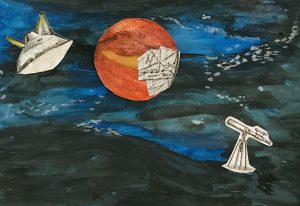 Humans have been obsessed with Mars from a distance for thousands of years. At first, maybe it was the fact that Mars stands out in the night sky because of its reddish color. But, as we learned more about Mars, and the conditions there, it was the possibility of life on this distant planet that captured our imagination. At its closest, Mars is nearly 40 million miles away from earth — and we’ve tried for centuries to bridge that distance — from telescopes to flybys and probes. Mars has inspired wild fantasies about distant civilizations and little green men. It’s put a spell on many observers, trying to unlock the mysteries of the red planet. On this special episode of The Pulse, we explore what we are learning about Mars, and when we can expect to actually see humans set foot on this planet.