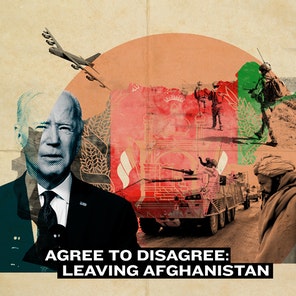 The Taliban have won. Twenty years after the 2001 invasion, the U.S.-backed government in Kabul has fallen. The Afghan president has fled. Taliban leadership, which ran the country in the late 1990s, is now firmly in place within the presidential palace. But after two decades of war, tens of billions spent, hundreds of thousands of lives lost – including more than 2,300 U.S. military personnel – bigger questions have emerged: Is the cost of leaving greater than the cost of staying? And was pulling out the right decision? Intelligence Squared and its host John Donvan examine these competing perspectives in this special timely edition of Agree-to-Disagree: Leaving Afghanistan.

First, a conversation with Ahmed Rashid, a Pakistani journalist and best-selling author, who is one of the world’s leading experts on the social and political situations in Pakistan and Afghanistan. His first book, Taliban: Militant Islam, Oil and Fundamentalism in Central Asia, explores the shadowy world of the Taliban and quickly became a #1 New York Times bestseller.  Rashid has been called “Pakistan’s best and bravest reporter” (Christopher Hitchens).

Then, a competition of ideas: Arguing in favor of leaving is Daniel Markey, Senior Research Professor at Johns Hopkins University School of Advanced International Studies. Arguing against leaving is Kori Schake is a senior fellow and the director of foreign and defense policy studies at the American Enterprise Institute (AEI). Emmy award-winning journalist John Donvan is the moderator.