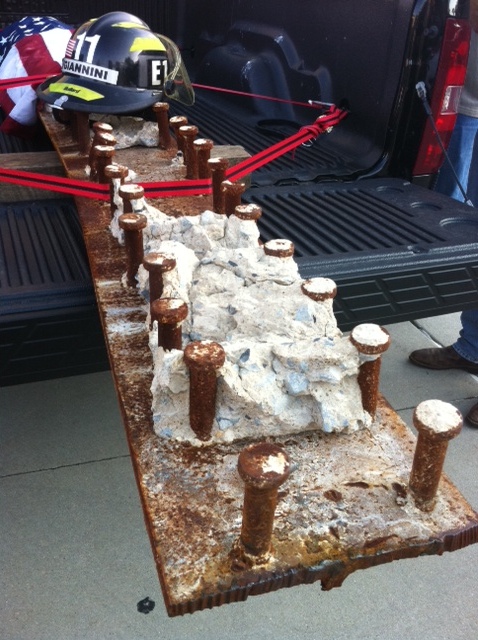 (KCPW News) Firefighters from Grants Pass, Oregon, made a stop at a Salt Lake City fire station this morning, displaying a piece of the World Trade Center retrieved after the 9-11 terrorist attacks. Joe Hebert, one of the firefighters who flew to New York to collect the steal beam, says it’s a floor girder from one of the Twin Towers. He says it’s incredible to see that there’s concrete left on the beam because of the enormous force it endured.

“When the towers came down, you’ve seen the video where all you see is a cloud,” says Hebert. “Well, that cloud was concrete, glass, just everything being turned into a dust. You can also see that there’s broken rivets up there. There’s rivets that are bent completely over. And then if you look right down the beam, this used to be an I-beam. And it’s twisted.”

Hebert says witnessing the strength of that force is part of what makes having this remnant of the towers so emotional.

Emotional is also how he and his colleague described the trip to New York, where they met with firefighters who survived the attacks.

“One of the guys we met, he was supposed to be working that day, but two days prior, they had three structure fires in buildings that were over 10 stories, and on the second fire he hurt his leg,” Hebert says. “So he was out on 9-11 and the guy that took his place and his whole company were killed.”

Hebert and his partner will make several more stops on their way back to Grants Pass, where the beam will remain on display permanently.