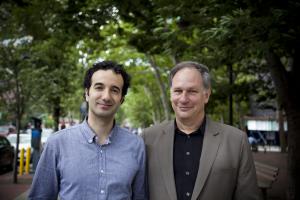 Radiolab has become a public radio phenomenon. Co-hosts Jad Abrumad and Robert Krulwich’s unique blend of science, sound, wit and theatricality have made the show a hit on hundreds of radio stations. Now, they’re bringing it to Salt Lake City, first speaking at the Natural History Museum of Utah’s Nature of Things Lecture Series, then performing Radiolab: In the Dark at the Capitol Theatre.

Sometimes the funniest theatre is about theatre itself. Pioneer Theatre Company’s Artistic Director Charles Morey’s Laughing Stock was first produced by PTC in 2001, and has since been produced nearly a hundred times across the U.S. Now, it’s returned to PTC, running through April 7. Centering on a summer theatre dubbed The Playhouse, comedy ensues when things go terribly wrong.