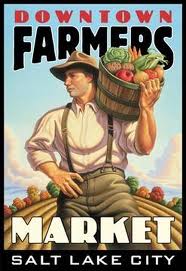 Twenty years ago, the Downtown Farmers Market launched a commitment to organic and locally-grown foods in Salt Lake City with just a handful of local growers. Today, more than 250 vendors and thousands of visitors pack Pioneer Park every Saturday morning through the growing season. On Tuesday, we mark the market’s 20th anniversary with a look at its humble beginnings and its role in broadening the “local” message.

Car aficionados have long viewed their metal trophies as works of art. Now the rest of us can admire the artistry and the engineering of high-performance vehicles in a new exhibit at the Utah Museum of Fine Arts. On Tuesday, we learn more about “Speed,” which is rolling some of the finest and fastest automobiles into town.

“Speed: The Art of the Performance Automobile” is now showing at the Utah Museum of Fine Arts through Sept. 16, 2012. For more information, visit http://www.speedumfa.com/.

Environment Some Struggle at Farmers Market Due to Bad Spring Weather