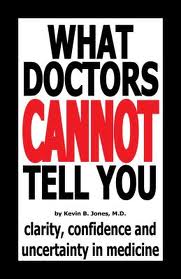 Patients put a lot of trust in their doctors, but they can also feel intimidated, tentative or misunderstood during interactions with their physician. Dr. Kevin Jones, surgeon and researcher at the Huntsman Cancer Institute, explores the dynamics of doctor-patient communications in a new book and on Wednesday, he joins us to talk about the questions doctors can answer, which ones they can’t and which ones they should.

Dr. Kevin Jones will read from his book, “What Doctors Cannot Tell You: Clarity, Confidence and Uncertainty in Medicine,” on Wednesday, July 11 at 7 p.m. at the King’s English Bookshop, 1511 S. 1500 East, Salt Lake City.

Four years ago, bike racer Arielle Martin crashed in the world quarterfinals and missed her chance to compete in Beijing. She wasn’t about to let that happen again. The Cedar Hills native and BYU grad placed fourth at the BMX World Championships this past May and now she’s headed to London for the 2012 Summer Games. On Wednesday, Martin joins us to talk about realizing her Olympic dreams.

City Views CityViews 2/15/12: The Dark Side of Tanning