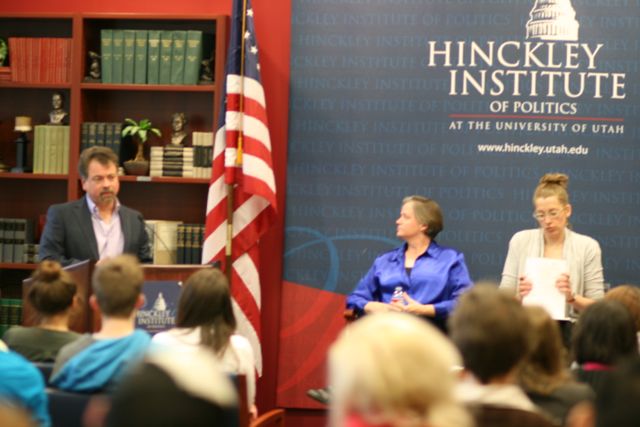 The Hinckley Institute Radio Hour (Air date: Apr. 2, 2014) – Last December 20th, after U.S. District Court Judge Robert Shelby overturned Utah’s Amendment 3 that defined marriage as only a union between a man and a woman, over 1,200 same sex couples in Utah were able to marry until Jan. 6th when the U.S. Supreme Court stayed that decision. The legal battle over the rights of same sex couples to marry continues to play out in a Federal courts across the country.  Meanwhile, the Obama Administration now recognizes same sex married couples by extending to them eligibility for Federal benefits, and same sex marriage is already legal in 17 states. In this program, three University of Utah professors – Elizabeth Clement, Daniel Levin, and Ella Meyers – examine the same sex marriage movement from an historical, legal, and political perspective.  This discussion was recorded with an audience of students and faculty, in the caucus room of the Hinckley Institute of Politics, on March 26, 2014.