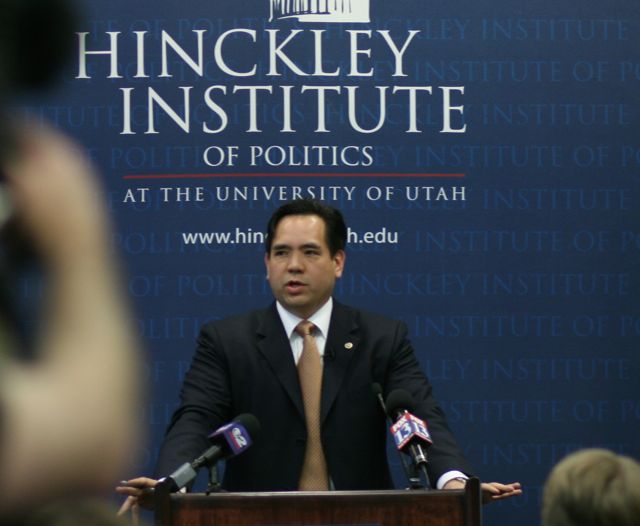 The Hinckley Institute Radio Hour (Air date: Apr. 23, 2014) – Sean Reyes was appointed Attorney General on December 30th by Gov. Herbert.  His appointment followed months of legal investigations of unethical and widespread abuse of public trust in the office by former Attorney Gen. John Swallow.  Reyes is now running to keep his seat to fill the two years remaining on Swallow’s term.  Reyes, a Republican, will face Democratic challenger Charles Stormont for the A.G. position.  Meanwhile, Reyes is now responsible for leading the State of Utah’s contentious appeal of a Federal Court’s decision to allow same sex marriage in Utah.  Recently Reyes also filed a petition, on behalf of the Utah Depart. of Health and the Office of Vital Records and Statistics, to halt child adoptions by LGBT parents that were set in motion after that contended Federal Court decision. But critics say the State’s lawsuit, lead by Reyes, adds insult to injury for the parents who now face a costly and confusing legal gauntlet.  In this hour, Reyes shares his thoughts on the A.G.’s office, and how trust might be restored and maintained in the future.  He also offers thoughts on the current Amendment 3 case, and the legal question of same sex marriage in Utah.  This Hinckley Radio Hour was recorded on April 18th, 2014.