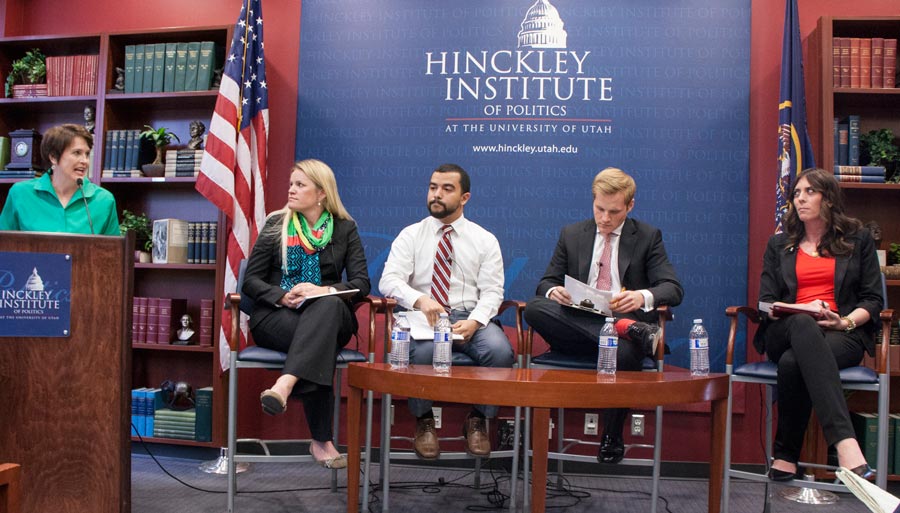 The Hinckley Institute Radio Hour (Air date: May 14, 2014) – Recently a debate has surfaced among the University of Utah community over whether to change some of the lyrics of the 110-year old fight song “I Am a Utah Man”.  An emotional statewide debate ensued after the Associated Students of the University of Utah (ASUU) raised the discussion to change its lyrics last March.  What’s in contention are proposals to adjust such lyrics as “I’m a Utah Man” and “Our Co-Eds are the Fairest” which some critics say are sexist and exclusive of some marginalized populations of students.  But others contend the current refrain honors tradition and holds sentimental value for alumni.  University of Utah President David Pershing asked the Office of Student Affairs to assemble a committee to consider changes to the fight song.  A decision is expected by the end of the summer.

On April 18th, 2014, the university assembled a panel of current and former University of Utah students to discuss the matter.  Arguing against changing the fight song is Natalie Harris, a Utah graduate and office of development staff member.  Also, Justin Newhall, who graduated this year and was a drum major with the U’s marching band.  Arguing for changing the fight song is Courtney McBeth, Assistant Director at the Hinckley Institute of Politics & Director of Global Internships for the Office for Global Engagement. McBeth was a 2001 graduate and former All-American goalkeeper for university’s women’s soccer team.  Also, Sam Ortiz, who is the out-going ASUU student body president.  The debate was moderated by Annie Christensen, Special Assistant to the Vice President for Student Affairs.