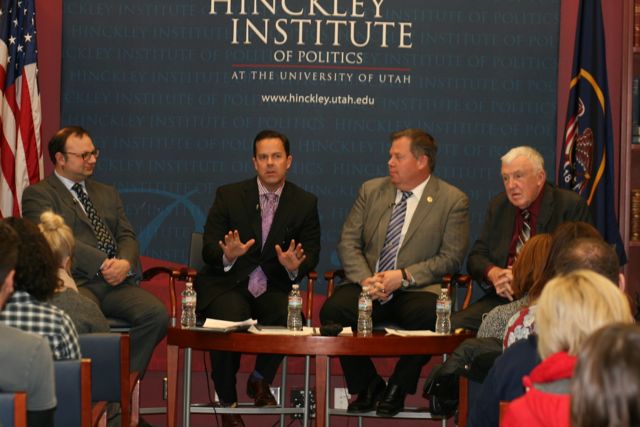 The Hinckley Institute Radio Hour (Air date: January 21, 2015) –  America incarcerates more people than any other country in the world.  Moreover, the U.S. spends lots of money to keep lots of people in prison.  In Utah, corrections officials say continuing growth in prison populations will cost Utah an additional half a billion dollars over the next 20 years, unless something changes.  People who study the corrections system say we may be better off directing non-violent or low-level offenders to more effective, less expensive alternatives, and reforming sentencing policies.

This is a panel discussion among two prison reform policy advocates from Texas, and two Utah state lawmakers who are currently working to reform Utah’s corrections system: Marc Levin, is Policy Director for Right on Crime and Director for Effective Justice at the Center for the Texas Public Policy Foundation; Jerry Madden served 20 years in Texas House of Representatives and helped transform Texas’s criminal justice system; Rep. Brad Wilson serves as Majority Assistant Whip and sponsored the legislation to relocate state prison; Rep. Eric Hutchings has served in the Utah House for 14 years and served on various committees dealing with criminal justice in Utah; and Kirk Jowers is Director of the Hinckley Institute of Politics and moderated the discussion.  The discussion was recorded January 15, 2015.