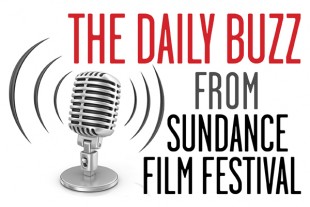 Welcome to daty 2 of Daily Buzz’s coverage of the 2017 Sundance Film Festival at Park City, Utah. On today’s episode we cover hot topics with Bryan Glick (THE FILM COLLABORATIVE), David Fear (ROLLING STONE), and Chris Vognar (DALLAS MORNING NEWS) including what happened to the Untitled Buena Vista Social Club Documentary and the Women’s March that happened right outside our studio on Main Street. We then highlight films from this year’s Slamdance showcase. We chat with WHAT LIES UPSTREAM Director Cullen Hoback about his investigation of water contamination. We then talk practical and visual effects with director Bill Watterson and actor Nick Thune of DAVE MADE A MAZE. Director/writer Cheryl Nichols, co-writer/star Arron Shiver, and producer/actor Cassidy Freeman of CORTEZ joins us to chat about the writing process (and finding love on the job). Finally, we chat with co-directors Yu Gu and Scott Drucker of WHO IS ARTHUR CHU, who documemted the divisive Jeoporady champion’s rise as a social media figure.

The Daily Buzz from the Sundance Film Festival was an recurring series, recorded on-site in Park City, Utah during Sundance and featuring interviews with some of the most important voices in the entertainment industry, including directors, actors, producers, festival directors and journalists in the independent film world. It aired during Sundance from 2014-2020.
On Air