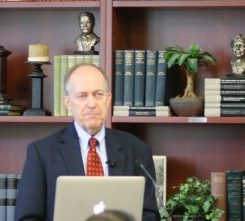 The Hinckley Institute Radio Hour (Original air date: January 13, 2016/Revised air date: August, 6, 2019) — This past week, the trade war between China and the U.S. has reached a new high-water mark with China suspending purchases of U.S. agricultural products in reaction to threats of a new round of U.S. tariffs on $300 billion of Chinese goods. These rising economic barriers have been combined with a devaluation of the Chinese currency to a more-than-decade-low versus the dollar in an effort to strengthen the appeal of Chinese exports. The Treasury Department has since labeled China a “currency manipulator” at the behest of the Trump administration. In reaction to the uncertain future between the two economic superpowers, the stock market fell more than 900 points, the worst drop of 2019. While no end is in sight for either side of the economic conflict, understanding how this situation developed over the past several years and how it is shaped by the decades before can provide insight into an uncertain future.

To better understand these complex relations and mutual perceptions of China and the United States, Robert Griffiths’s talk at the Hinckley Institute from October 19, 2015, is illuminating. Aside from maintaining the World’s 2nd largest economy, Griffiths says China’s transformation into a dominant superpower will likely not stop. This is particularly critical as China asserts its power in the Asian Pacific, where military tensions with the U.S. have also been growing.

Robert Griffiths teaches at the National Defense University, and he has served in places like Colombia; Thailand; Taiwan; and mainland China. He also worked for Bureau of Economic Affairs; as deputy director in the U.S. Bureau of East Asian and Pacific Affairs and worked for the Office of the Secretary of Defense.