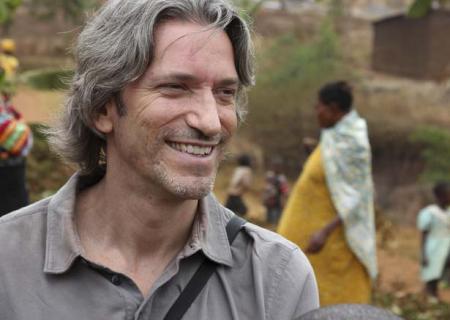 Much of the news from Africa highlights the catastrophic and the tragic with war, famine, and lawlessness dominating the headlines.  Yet, many of the deadliest wars in Africa have been resolved and the transformation from war to peace and lawlessness to order now under way.  In his lecture, Prendergast will focus on Hollywood images that portray Africa in a hopeless state and then reveal the sharply contrasting reality.  He will also situate Africa in a historical progression that sees war as a significant factor in state formation, true in the United States, Europe, and elsewhere.

John Prendergast is a human rights activist and best-selling author who has worked for peace in Africa for over 25 years. He is the co-founder of the Enough Project, an initiative to end genocide and crimes against humanity.

Under the umbrella of the Enough Project, Prendergast launched the Satellite Sentinel Project along with friend George Clooney, which aims to prevent conflict and human rights abuses through satellite imagery. With Tracy McGrady and other NBA stars, Prendergast cofounded the Darfur Dream Team Sister Schools Program to fund schools in Darfurian refugee camps and create partnerships with schools in the United States. He also helped launch the Raise Hope for Congo Campaign, which highlights the issue of conflict minerals that fuel the war there, and Sudan Now, which focuses on bringing peace to the embattled country.

Along with his first little brother in the Big Brother program, Prendergast co-wrote a dual memoir entitled Unlikely Brothers. His previous two books, both co-authored with Don Cheadle, are Not on Our Watch, a New York Times bestseller and NAACP nonfiction book of the year, and The Enough Moment: Fighting to End Africa’s Worst Human Rights Crimes.

Prendergast has worked for the Clinton White House, the State Department, two members of Congress, the National Intelligence Council, UNICEF, Human Rights Watch, the International Crisis Group, and the US Institute of Peace.  He has appeared in several documentaries including Sand and Sorrow, Darfur Now, 3 Points, and War Child. He also coproduced Journey into Sunset as well as the forthcoming Voices of Uganda, both about Northern Uganda, and partnered with Downtown Records and Mercer Street Records to create the compilation album “Raise Hope for Congo,” combating sexual violence against women and girls in Congo.

The Tanner Humanities Center is proud to present this lecture as a part of their World Leaders Lecture Forum.  This lecture aired on KCPW-FM  88.3 and 105.3 Friday September 13, 2013 at 9 AM and 8 PM.

Enjoyed the lecture. .we spent 18 months in South Africa and 14
months in Uganda. .we have seen and felt what he was talking about…such hard times ..but such hopeful and loving people…blacks and whites….even went to Robben island…wonder what will happen in South Africa when Mandella passes on… went to cities Koney terrorized… they are still suffering… like he said Africa will be so different in 50 years… so much growth needs to happen… we loved being there..