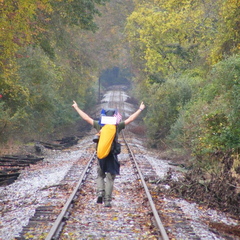 Andrew Forsthoefel set out at age 23 to walk across America, East to West, 4000 miles, with a sign on him that said, “Walking to Listen”. This hour, co-produced with Jay Allison, tracks his epic journey. It’s a coming of age story, and a portrait of this country – big-hearted, wild, innocent, and wise.

I decided to walk across the country for several reasons. Producing an hour-long radio essay about it was not one of them. When I left home, I had no idea what would become of the tape I hoped to record.

At the beginning of the walk, I thought it would be a good idea to have a focus question for the interviews. The question was about transformation. What does it mean to you and when have you experienced it? I was at a transformative time in my own life, so that question seemed right.

I quickly abandoned the idea, though. It seemed too contrived or constraining. Instead, I just started talking to people about their lives and, sometimes, what their lives had taught them. I’d ask people about the idea of home, aloneness, family, love, death; all sorts of stuff.

I thought people would be resistant to being interviewed. Not so. The vast majority wanted to be heard, and they didn’t mind the recorder. Nearly every time, they had something they wanted to share.  I was wearing a sign that said “Walking to Listen,” and there was no shortage of people to listen to.