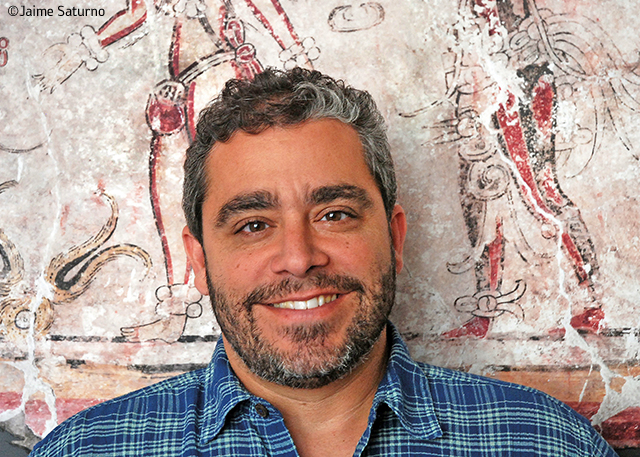 The guide had sworn the ruins were just a few hours’ walk through the jungle. That was yesterday. Disoriented, lost, and parched from thirst, William Saturno stumbled across a looters’ tunnel that promised relief from the jungle heat. Turning on his flashlight, he couldn’t believe his eyes: the colorful figures of Maya deities seemed to dance on the wall before him. But it was no illusion: Saturno had discovered the 2,000-year-old mural of San Bartolo. Now, if he could only survive long enough to tell the world.

Archaeologist and National Geographic Explorer Saturno received his Ph.D. in anthropology from Harvard University in 2000, a year before his miraculous discovery of the oldest intact murals ever found in the Maya world. Currently, he directs the San Bartolo Regional Archaeology Project, a multinational interdisciplinary research effort dedicated to the excavation and conservation of the spectacular murals.

For more than a decade, Saturno has searched for clues to the mysteries of the Classic Maya, carrying out excavations in Mexico, Belize, Guatemala, and Honduras. Most recently, in the sprawling complex of Xultún, Saturno discovered a house whose walls are covered with glyphs representing calculations of the various cycles of the Mayan calendar—calculations that showed the Mayan people, contrary to popular belief, believed the world would continue well past 2012. The discovery, which appeared in National Geographic, answers long-held questions about the Mayan people, their history, and their predictions.

Tune in to KCPW to hear this storied, entertaining explorer as he pulls back the curtain on archaeology’s nearly two-century quest to understand Central America’s most mysterious and influential civilization. Colorful artwork, tales of royal in-fighting, and epics of war await.

KCPW will record this lecture on February 12th and broadcast this talk on Friday February 15th at 10 AM and 8 PM on 88.3 FM KCPW.